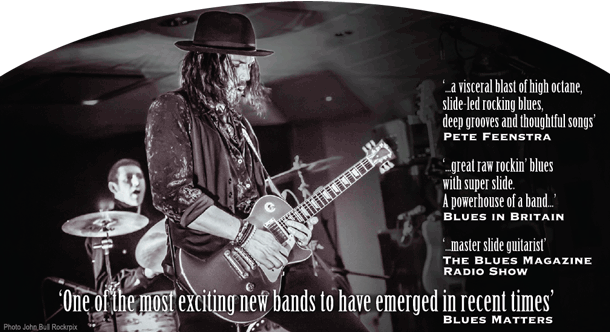 Troy Redfern combines the rawness of Hound Dog Taylor, the free-form approach of Sonny Sharrock, the firebrand playing of Johnny Winter and the technique of Dave Hole, mixed with the ghost of Elmore James'.

It all fits perfectly into Troy Redfern's world. He's a passionate, intense, free spirited indie blues artist whose ferocious slide guitar style twists and turns timeless themes and ideas to his own ends. In the studio, the multi instrumental slide guitarist and producer is a one man band who painstakingly pays attention to the minutiae of his tone, the imaginary arrangements and noir filled lyrics.

As a band leader he's trusting enough to know that wherever his spontaneity takes him he has a locked in rhythm section that will push him to the limit while also giving him a safety net. Back in the studio, he does it all himself, and it's hard to grasp his unrelenting energy.

He's a musical visionary unafraid to trample on the boundaries of restricting labels. His talent spans ferocious slide playing, thoughtful production, passionate vocals and an approach to contemporary indie blues that references delta blues roots, while turning familiar emotions, themes and riffs from a bygone era into a broad based contemporary musical template.

Troy ushers us into a restless, musical journey that spans big musical vistas. He's a guitarist for whom tone, feel and grooves are his working tools and while his songs range from a whisper to a scream, he performs a balancing act between pure spontaneity and deep grooves.

His music is physical, engaging and emotive and worthy of hip references like indie blues, except it's backed up by real substance and stretched to the limit by virtuoso solos. When you listen to Troy Redfern you're buying into a new world vision where his high energy approach uncompromisingly hits you in the guts before making a cerebral connection.